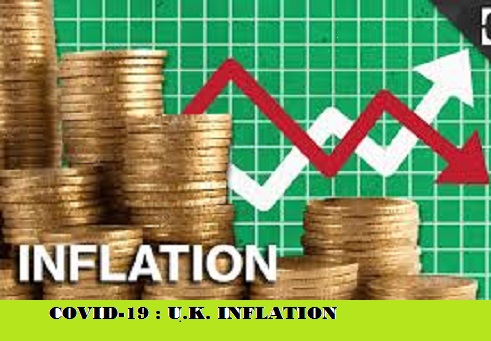 The U.K. inflation rate fell to the lowest since 2015 last month, driven by government tax cuts and other stimulus designed to dig the economy out of the depth of the coronavirus crisis.

The reading of 0.2% was slightly higher than the zero forecast by economists, although the drop from July’s reading of 1% was still the biggest since 2008. It’s the latest sign of the volatility brought about by the pandemic, which saw output shrink by more than 20% in the second quarter.

Prices fell on the month as government measures to support businesses kicked in. Those include a temporary sales-tax cut for hospitality firms, and subsidizing some restaurant meals in August under the Eat out to Help Out program announced by Chancellor of the Exchequer Rishi Sunak.

Economists expect a bounceback in coming months, and Bank of England Governor Andrew Bailey said this month he didn’t expect the rate to turn negative in the short-term.

Still, inflation has been at less than half the BOE’s 2% target since April — the first full month the virus lockdown — and the report comes a day before officials announce their September policy decision.

While no move is predicted on Thursday, the low reading may buttress arguments for an expected further easing of policy later this year.

Prices at restaurants and cafes fell 5.5% from July and were down 2.6% from a year earlier. The decline reflected the fact that consumers paid a subsidized rate during the month, with the government making up the rest.

There was also downward pressure from air fares, which posted the first decline for the month on record after coronavirus restrictions brought international travel to a standstill. Prices fell 1%, compared with a 22.4% increase a year earlier, with the drop driven by European routes, the ONS said.

SBI ATM cash withdrawal new rules from today: All you need to know