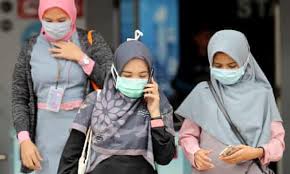 Two Indonesians have tested positive for coronavirus after coming into contact with an infected Japanese national, President Joko Widodo said on Monday, marking the first confirmed cases in the world’s fourth-most populous country.

The discovery comes after some medical experts had raised concerns about a lack of vigilance and a risk of undetected cases in the Southeast Asian country of more than 260 million people, while authorities have defended screening processes.

Indonesia’s main stock index wiped out earlier gains to fall 1.4 percent after the announcement. The rupiah currency extended falls against the dollar to trade down 0.5% at its weakest since May 2019.

A 64-year-old woman and her 31-year-old daughter had become infected after contact with a female Japanese visitor, who lived in Malaysia and had tested positive after returning from a trip to Indonesia, Widodo told reporters at the presidential palace.

“After checks, they were in a sick state. This morning I got a report that the mother and the daughter tested positive for coronavirus,” he said. The pair were being treated at Jakarta’s Sulianti Saroso infectious diseases hospital.

The Japanese national was a friend of the two women’s family and had visited their house in Depok on the outskirts of Jakarta, Health Minister Terawan Agus Putranto told reporters. Authorities were checking who else she may have come into contact with.

The daughter and the Japanese woman had gone dancing at a venue in Jakarta on Feb. 14, Putranto said. The Japanese national had informed the daughter on Feb. 28 that she had been infected.

Two other people sharing the house with the infected Indonesians had not shown symptoms of coronavirus, he added.

Jakarta Governor Anies Baswedan said he had set up a response team to help deal with the situation in the capital.