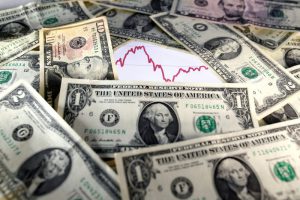 The dollar stood tall over the languishing euro and heavily sold exporter currencies on Wednesday, as investors reckoned with a deepening economic fallout from the coronavirus.

The new coronavirus has caused 2,004 deaths in China and infected more than 74,000 people, while measures to contain it have paralyzed the economy and the supply chains it feeds.

The yield curve between U.S. three-month bills and 10-year notes inverted overnight, a bearish economic signal, and German investor confidence slumped as its economy stagnates, sending the euro cheaper than $1.08 for the first time since 2017.

Against a basket of currencies, the greenback is sitting by a four-month high at 99.452. It touched a one-week high against the Australian and New Zealand dollars overnight.

Both Antipodean currencies are heavily exposed to China, and both have lost roughly 5% against the dollar this year. Norway’s krone, sensitive to the global growth outlook via oil exports, has shed 6% in 2020 and slumped to an 18-year low overnight.

The euro has fallen 3.7% amid increasing signs of divergence between the European and U.S. economies.

China says figures indicating a slowdown in new cases in recent days show the aggressive steps it has taken to curb travel and commerce are slowing the spread of the disease beyond central Hubei province and its capital, Wuhan.

That has not stopped worries mounting, with hedge funds turning to proxies from railway movements to port activity and air pollution to try and gauge how much production remains offline.

Gold is sitting above $1,600 an ounce for the first time since U.S.-Iran tensions in the Middle East sent it spiking in early January <xau=>. Priced in euros, gold’s value jumped almost 2% to a record high overnight.

China’s yuan was last steady at 7.0017 per dollar in offshore trade.

U.K. Inflation Accelerates to Its Fastest Pace in Six Months